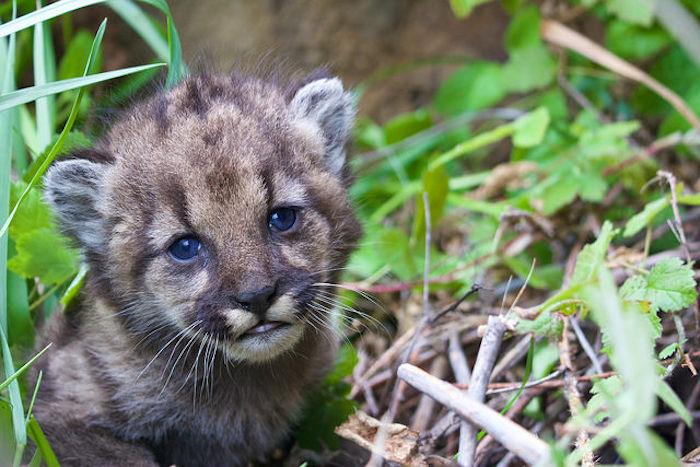 The birth this week of a mountain lion kitten in the Santa Monica Mountains west of Los Angeles brings cougars back into the news cycle once again. From attacks on hikers near Silicon Valley and a viral video car-hopping appearance in San Jose to a photo bombing cougar in front of the Hollywood sign, the big cats have become as much a part of California’s 21st century urban scene as gourmet tacos, the Splash Brothers and Tesla electric cars.

The growing number of cougar-human interactions in the Golden State is symptomatic of the continued push by people into traditional big cat territory — a battle the lions are bound to lose unless scientists and conservation experts can devise new innovative ways to ensure their survival in two of America’s largest metro areas.

“They have proven themselves very resilient, very adept at survival,” says Beth Pratt-Bergstrom, California Director for the National Wildlife Federation (NWF) and author of the new book When Mountain Lions Are Neighbors. “Even in urbanized settings they stay in wild areas. But if they’re going to have a shot [at long-term survival] they’re going to need some help from us.”

Help On the Way

That help is coming from several different areas, mostly high-tech in nature and highly innovative. For instance, geneticists are working on ways to artificially enhance the urban cougar’s DNA and gene pool, badly depleted because of massive human development since the 1920s.

A study by the Wildlife Genetic Laboratory at UC Davis suggests that one way to combat low genetic diversity — which can lead to hereditary abnormalities and make a species less resistant to environmental change — is bringing in cougars from elsewhere to bolster “genetically stranded” urban populations.

Through efforts like the East Bay Puma Project and Southern California Mountain Lion study, researchers are capturing and fixing GPS collars onto every mountain lion in the Bay Area and southern California. Telemetry tracks their movements and helps identify their territories as a means to safeguard their natural habitats from further human encroachment.

Efforts are also underway to limit close encounters of vehicle kind. Freeways in the Bay Area and L.A. are actually the mountain lion’s biggest enemy. For one thing, they act like giant fences that restrict their territorial movements. And getting hit by vehicles speeding along these freeways is the single biggest cause of cougar deaths each year.

NWF is currently working with the National Park Service, the California Department of Transportation (Caltrans) and local partners like the Santa Monica Mountains Fund to develop innovative wildlife tunnels and bridges under and over California freeways — manmade extensions to existing wildlife corridors.

Caltrans has announced a $10-million project to construct a wildlife bridge where Highway 101 crosses Liberty Canyon on the west side of LA, an area where more than a dozen mountains lions have been struck and killed by vehicles in recent years.

“It potentially could be the largest overpass in the world for wildlife, which would be a great statement for LA,” says Pratt-Bergstrom. “Like parkland extended over the freeway. Landscaped, absolutely gorgeous. And there would be other benefits. We use the mountain lion as the poster child, but obviously other wildlife would use this. It really will enhance connectivity of the ecosystem overall, not just for lions. And you can also talk about recreation — combine it with a bike path.”

NWF has also launched a “Save the LA Cougars” campaign to raise awareness of the city’s big cat population and generate funds to support efforts to save the state’s urban mountain lions.

gars continue to make guest appearances. One audacious cat, a young male, was caught on a security camera outside the Los Angeles home of Chris Stills, son of legendary rocker Stephen Stills. To reach that location, the big cat would have needed to cross the 405 Freeway somewhere between the Getty Center and the San Fernando Valley. At last report, the cougar was headed due east into the Hollywood Hills.