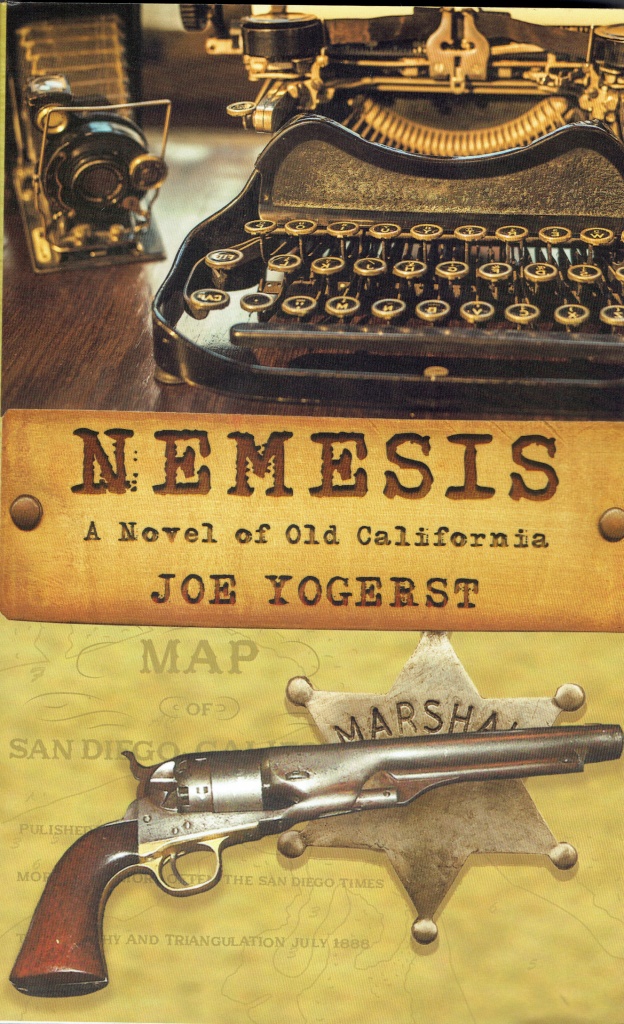 Forget Deadwood, Dodge and Tombstone — the biggest, baddest boomtown of the 1880s was San Diego, CA. The attraction wasn’t gold or silver but cheap land, the promise of an oceanfront paradise where it never snows and rarely rains, and the too-good-to-be-true deals being offered by local real estate merchants.

Read all about it in NEMESIS, a new murder mystery from Joe Yogerst that combines riveting fiction with true crimes and real-life characters from frontier-era San Diego. Available Oct 30th at bookstores and online at Amazon, Barnes & Noble, Goodreads and elsewhere.

Nemesis is a taut mystery and a satisfying one, combining the desires for revenge, ambition, and justice, as it echoes Cradoc’s rationalization: “What is wrong and what is right these days? It was getting awfully hard to tell in California.” —Toni V. Sweeney, author of The Adventures of Sinbad and The Kan Ingan Archives series. Also writes under the pseudonym Icy Snow Blackstone

Critique: A deftly crafted saga of a novel by an author with a genuine flair for originality, attention to historical detail, the creation of memorable characters, and an inherently page turner of a read with more twists and turns than a Coney Island roller coaster, Joe Yogerst’s “Nemesis” is an especially and unreservedly recommended addition to community library collections. It should be noted for personal reading lists that “Nemesis” is also available in a digital book format (Kindle, $9.99).
James A. Cox, Editor-in-Chief, Midwest Book Review

“Skillfully told and artfully crafted, Joe Yogerst paints a vivid portrait of San Diego in its infancy. From the breath-taking first chapter to the twist at the end, Nemesis is a psychologically complex and compelling thriller.”
– Cynthia A. Graham, author of the award-winning Hick Blackburn mysteries

San Diego is a boomtown in 1888. As new development moves west, fortunes in land are made and lost. Suddenly, a wealthy man is killed. U.S. Marshal Cradoc Bradshaw and San Diego Times reporter Nick Pinder are drawn into the investigation of what eventually becomes a series of murders. But, like everyone else involved in the case, both men are hiding something. Bradshaw and Pinder grew up together; what made them enemies? Why is Bradshaw seeing a woman with a violent past, while Pindar neglects his marriage for work? The villain’s point of view is presented in alternating chapters to create a sense of foreboding. Nemesis, as he calls himself in notes he leaves behind, is determined yet conflicted. What did his victims do to deserve their harsh and grisly deaths? The question at the heart of Nemesis—can two men put aside their differences to save the day?—appears in many westerns, but that traditional dressing belies the real heart of the novel, which is truly a psychological thriller.
— Jeanne Greene

5.0 out of 5 stars Page-turning Mystery in a Vivid Historical Setting – a Great Read!
November 5, 2018
Format: PaperbackVerified Purchase
Everyone loves a good mystery, and “Nemesis” fits the bill in more ways than one. Set in 1888 San Diego, the now-beautiful city was once a wild west backwater looking for its identity. Its movers and shakers were positioning the harbor town to surpass both sleepy Los Angeles and the booming San Francisco as the premier deep water shipping port on the west coast — but some of those prominent citizens had murky pasts that had to be paid for , , , (Muhwhahahah!) in blood.
Lawman Cradoc Bradshaw and the legendary Wyatt Earp team up to solve a series of murders that plague the picturesque town and threaten its future. It’s a whodunit that kept me guessing down to the final pages.
A fascinating afterword section fills readers in on what’s truth and what’s fiction – very interesting and surprising, even for a life-long San Diegan.
Bravo to author Joe Yogerst for making Southern California’s wild west history come to life!

5.0 out of 5 stars Excellent Old California historical fiction – we need more.
December 5, 2018
Format: PaperbackVerified Purchase
If I could write good fiction, this topic of murder in Old California would be my first choice, and San Diego would be one of my first location choices. Because I can’t write good fiction, I hope that Joe Yogerst will continue to write more murder mysteries that take place in Old California. His Postscript information (Truth vs. Fiction) was a very helpful review of events, people and geography in San Diego history. The story was believable and exciting to the end. I hope that the author will consider writing similar books about Old California, with more on non-whites. Potential background could easily include a wide variety of locations (mining camps, Orange County, Los Angeles, Santa Barbara, San Francisco, Sonoma, etc.), and people (Hubert Howe Bancroft, Father Serra, the Big Four, Sutter, Mammy Pleasant, Chief Marin, Mariano Vallejo, governors (Spanish, Mexican and American), as well as a wide variety of businessmen, historians, military personnel, and politicians). Topics could include the four Presidios, the 21 Missions, the various California Ranchos (Spanish and Mexican and their litigation after the Mexican War), cattle ranches, pre and post Mexican War issues, Chinatowns in San Francisco and elsewhere, partial externination of California Indians, Negro Trail Blazers of California, newspapers, the California Society of Pioneers, the railroads, the University of California, and the Bancroft Library (best Western Americana collection in the world). The list of historical topics is exhaustive.

This story is a real page-turner, getting you hooked from the first chapter. Two former friends, now rivals — one a U.S. Marshal and the other a newspaper reporter, are wholly consumed with a series of murders occurring in San Diego. Their work obsession impacts personal and professional relationships, heightening the mystery with unexpected twists and turns. One of best parts of the book is its setting in different parts of 1888 San Diego. The story takes place in areas still recognized today, and it’s fascinating to learn about the historical significance. The Historical Postscript provided by the author, Nemesis: Truth vs. Fiction, is very well researched and an added bonus. (How did I not know that Wyatt and Josie Earp lived in San Diego, running saloons and gambling halls?!) Highly recommended story, especially for anyone familiar with San Diego. Congratulations to the author on a fantastic novel!
– Amazon Reader
5.0 out of 5 stars Historical fiction, a serial killer and western all in one book!

A long time fan of Joe Yogerst’s travel writing, I was curious to see how his foray into historical fiction compared to his previous books. Set in the frontier town of San Diego (who knew?), the book educated me on the history of the region and the early development of the city. Nemesis combines three of my favorite genres, mysteries, serial killers and historical fiction into one seriously good read.
– Amazon Reader
5 out of 5 stars This is a good read!

Verified Purchase
Nemesis is a great read from page one till the end. Characters are colorful and fully developed with a plot that is mysterious and suspenseful.
– Patrick Lucero 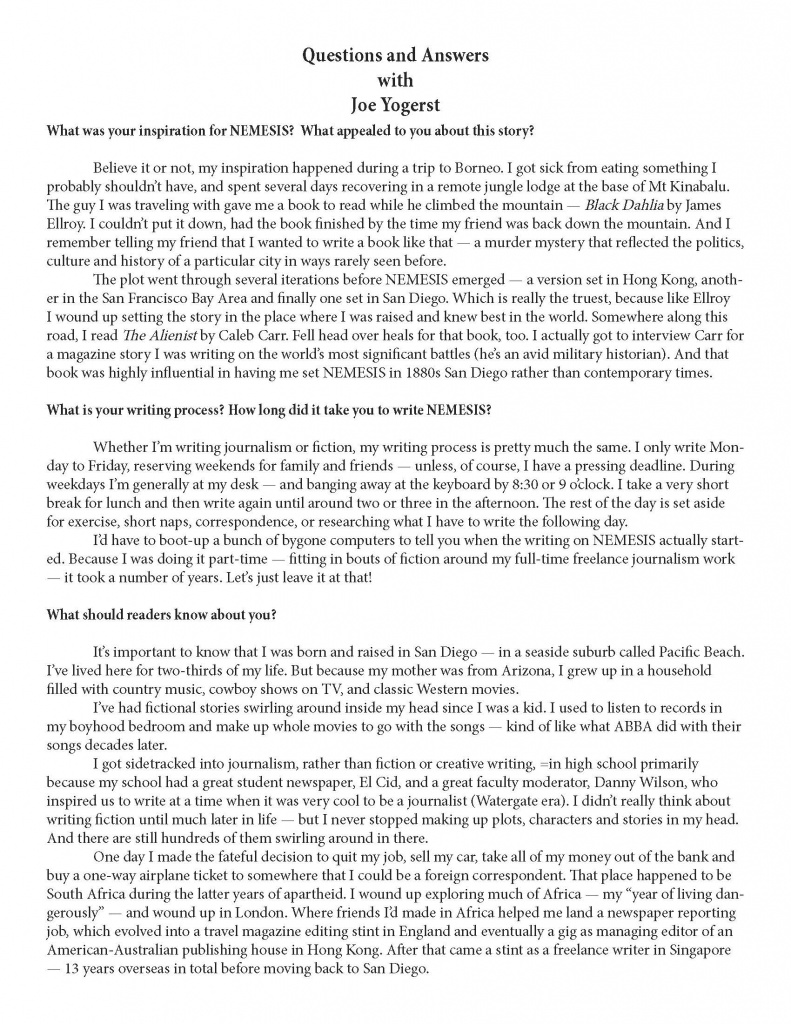